A murder in 1876; the killer’s hanging two months later. Rumours of a ghost in the costume room. Historical facts? An incredible backdrop for great theatre? How about both! The Players’ Guild of Hamilton, Inc. has been a leader in the local community theatre scene since 1875, making The Guild the oldest community theatre group in North America.

All of our productions are held in our intimate Studio Theatre at 80 Queen Street South in Hamilton, Ontario. The Guild is air-conditioned, wheelchair accessible and has a licensed lobby. A wide variety of restaurants are only a short walk away in the popular Hess Village area or on Locke Street.

Where it all started – Garrick Club

The beginnings of the Garrick Club were noted by an article in the Hamilton Evening Times on October 8, 1875, marking their debut performances of David Garrick and Raising the Wind. The following day, The Spectator said, “David Garrick is a play which is a very hard one for amateurs to attempt.” They went on to encourage the public to lend their support to the worthy aims of the club.

With a break from production from 1883-1886, the Garrick Club existed for about 35 years. However, by 1910 the group was beginning to falter, and the advent of WWI stopped any further productions.

Having debuted with the Garrick Club in Kitty Cline in 1897 (at the age of 15), Caroline Crerar attempted to resurrect the Garrick Club in 1926. However, it was not until 1929 that she succeeded in re-establishing the group, now known as The Players’ Guild.

As the early years passed, the group moved around seeking a permanent home for The Guild. They rehearsed above a restaurant and then in a room beside a baker where a fine coating of flour perpetually covered both props and actors. Performing at the Independent Order of Odd Fellows Hall, disaster struck in November 1939 and the hall, as well as all the props and costumes, burned down.

The land where the Guild House now stands was originally a Crown Grant to Caleb Reynolds in 1796. He sold it in 1803 to Jean Baptiste Rousseau, whose widow sold it again in 1816 to James Mills and Peter Hess. The property consisted of all the land between Bay and Locke Streets, and between the Mountain and the Bay. On June 24, 1816, the two owners divided the property in half, and James Mills retained the portion west of Queen Street, about 240 acres. When he died in 1852, his son, James Nelson Mills inherited the property. He began erecting low-cost housing on the property.

On January 5, 1876, Nelson Mills was attacked and stabbed 8 or 9 times by a market butcher, Michael McConnell, whose goods had been attached by Mills for non-payment of rent. He had been withholding the rent ($14.00) to try to force the landlord to make some much-needed repairs. Nelson Mills died on January 9, 1876.

By 7:30 that evening a jury had been sworn in and had gathered at Palm’s Saloon at the corner of King & Bay Streets (where the George Hamilton restaurant is now). The coroner’s jury found cause to send Michael McConnell to court on a charge of murder. McConnell was defended by John Crerar (coincidentally, one of the founders of the Garrick Club) who had him plead insanity, one of the first times this defence was used in Canada. Several expert witnesses supported this defence, but he was found guilty and sentenced to death. He was executed by hanging on March 14, 1876, at the old Barton Street Jail.

Mills’ widow sold the lot to Valancey E. Fuller, a local lawyer and the son of Thomas Brock Fuller, the first Bishop of Niagara. Bishop Fuller lived nearby in the house where CHCH-TV is now.

Valancey Fuller built a house on the lot in 1878. He then got himself into financial difficulties over a herd of Jersey cows that he had imported to his farm on what is now LaSalle Park. In 1889, the farm and all his assets, including the house, were sold.

In 1951 The Players’ Guild of Hamilton, Inc. bought the property and have owned it ever since.

In 1958 we added the studio space to the south side of the house. The only other structural changes to the building during our tenure were the removal of the large front porch, the grey paint job on the outside of the building and the red front door. 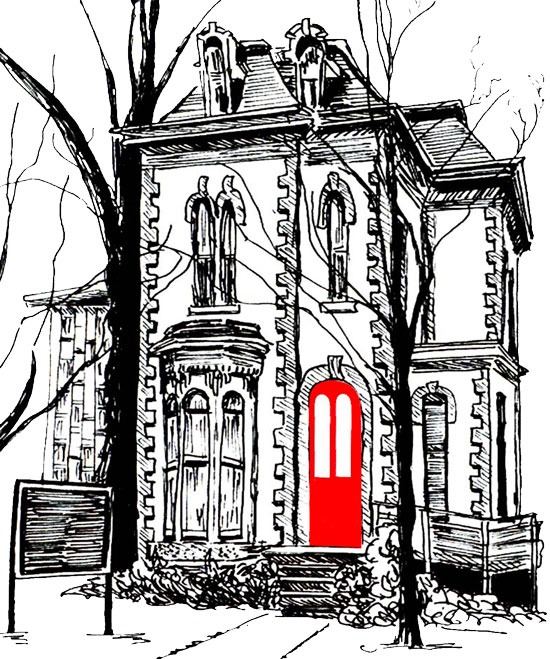 Come and see us! Buy Tickets